The Revolution Will Not Be Televised: footnotes

In a tribute to T. S. Eliot and Oliver Sacks, I thought I would provide a few footnotes to the most recent FIMP Book of the Month, "The Revolution". That's the cover up there, and here comes the first couple of pages.

"The Revolution Will Not Be Televised" is the first line of a very widely quoted poem by Gil Scott-Heron, which he first recorded in 1970, accompanied by congas and bongo drums. The video below will give you the poem in full. . .

Cell phone video is celebrating the tenth anniversary of its invention by Philippe Kahn this year.

The revolution being caught on video on page 1 is Eugene Delacroix's "Liberty Leading the People", painted in 1830.

You Tube was Time's Invention of the Year for 2006. Everything on video ends up on You Tube at one point or another.

OMG translates to "Oh My God!" in the world of text messaging, internet chatrooms and online discussion boards. LMAO is "Laughing My Ass Off". Use them wisely.

Recently in the grocery store I was eavesdropping on a conversation about someone who was dressed "all crazy and shit". I would like to see what that looks like.

It's possible that visitors from outside the U.S. might not recognize the three seated figures on the bottom right of the page as the three judges from "American Idol", a very popular television talent show devoted to incredibly generic popular music. Here the judges are assessing the performance of Che Guevara (1928 - 1967), a Marxist Revolutionary who has appeared on more t-shirts, coffee mugs, and baseball caps than any American Idol winner ever will.

This photograph by Alberto Korda is the iconic Che Guevara that appears on all of those t-shirts.

So there you have it, book lovers. You subscribers out there - you're fantastic.
Posted by Marc Snyder 1 comment:

Email ThisBlogThis!Share to TwitterShare to FacebookShare to Pinterest
Labels: artist's book, Book of the Month 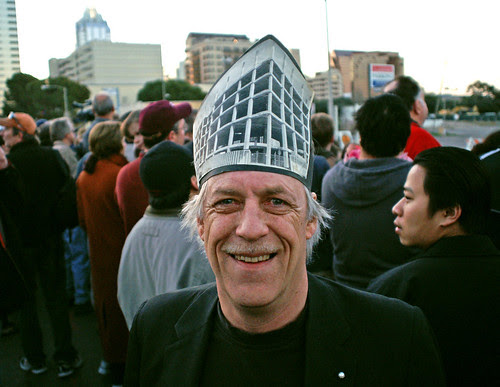 I had to get up before sunrise for work to join a gathering of people excited about watching an implosion. The building was called the Intel Shell - a remnant of the dot.com bust. Intel started construction and ran out of money and pulled back leaving a half finished eye-sore in downtown.

ain't Vegas. We don't get many building implosions here. Lots of people came early for the show. I overheard many people say they got up hours ahead of time to make sure they didn't miss it.

My favorite thing I saw there was this guy's homemade hat adorned with the image of the building. One reason is simply the shape reminds me of a Pope hat. He should have been pushing the button wearing that thing. I also applaud his crafty-ness and enthusiasm.

I feel like this happy guy and his hat tell you all you need to know about 's enthusiasm for getting rid of an old eyesore.

For anyone who still thinks they need to see a good ol' fashion implosion, here it is:

Posted by Justin Kasulka No comments: